From St. Louis to Kansas City… and everything in between!

In terms of creativity within their game attire, NHL players do not have much area to show their personality. Regular skaters must have a standard helmet, gloves, pants, skates, etc. all in code with their team’s colors and uniforms. Some players have tried to pull off the white skates look which have drawn high criticism from colleagues and fans. But there is one position in hockey where a player can truly show their creative and perhaps “fashionable” side. That would be the goalie. A goalie can customize their blocker, glove, pads, and helmet. Of course, their gear is required to match team colors but the realm in which they do so is completely up to them in terms of customization. The goalie mask is a personal piece, a place where many goaltenders can choose personal details to be painted onto the mask as a tribute to family, friends, their hometown, the city they are playing in, the legends of the franchise they are playing for, a nickname, etc. The options are endless.

David Gunnarsson, a goalie mask artist from Sweden, has both current St. Louis Blues goaltenders Jordan Binnington and Jake Allen as clients of his who both currently wear his masks during play. Gunnarsson grew up in Småland, Sweden which is an hour north of Orebro, Sweden where current Blues defenseman Carl Gunnarsson (no relation) grew up. According to his website, David grew up on his family’s farm and his grandfather told him he was going to grow up and become a farmer to take over the family business. Despite being groomed for such, David had an incredible passion for art and had started is his own airbrush company at the family farmhouse at age 16. As part of his “DaveArt” brand as a professional artist, one of the things Gunnarsson began to paint were goalie masks. After gaining popularity for his masks for goalies in Sweden, Gunnarsson created and painted his first mask for an NHL goalie in 2001 when he created a mask for Pittsburgh Penguins netminder Johan Hedberg, better known as “The Moose.” Gunnarsson immediately gained popularity in North America and had goalies lining up for him to create a mask for them. Gunnarsson’s services for masks were so in demand that he had to move to a stance where he could only accept mask requests from professional goalies as he did not have time for lower level goalies due to the massive amount of pros who wanted to work with him.

Fast forward to present day and Gunnarsson is essentially the most well-known goalie mask creator/painter the industry has to offer. DaveArt is the largest paint company in the NHL and he continues to create these masks on the farm he grew up on. A glimpse into David Gunnarsson’s clientele list speaks for itself, as he creates masks presently for the likes of Ben Bishop, Jonathan Quick, Robin Lehner, Frederik Andersen, Sergei Bobrovsky, John Gibson, Henrik Lundqvist, Pekka Rinne, Semyon Varlamov, and many, many more including of course both Blues goaltenders Jordan Binnington and Jake Allen.

Jake Allen became a client of DaveArt in 2018 with his first mask titled “Snake Soul” which featured to 90’s St. Louis Blues horn logo on the sides with snake skin and eyes on the top of the mask, an ode to “Jake the Snake.” As his various masks will show, Allen is fond of the Blues trumpet logo as it has been featured on every single mask that Gunnarsson has made for Allen. You will also notice that on the side of many of his masks that there is a pirate ship, which is a tribute to the New Brunswick, Canada flag which is wear Allen is from (Fredericton to be more exact). Since becoming a client of Gunnarsson’s Allen has had seven total masks made which are depicted below via Gunnarson’s profile on Flickr: 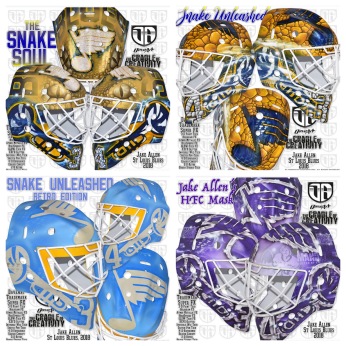 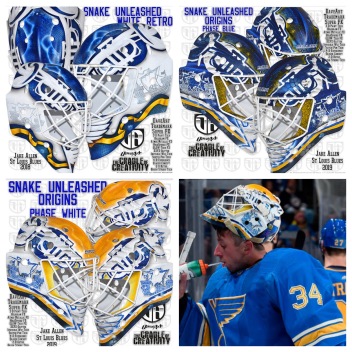 Jordan Binnington has been a client with DaveArt as well since 2018 when he came into the NHL on a full-time basis. Gunnarsson created the mask in which Binnington donned in his remarkable 2018-19 campaign with his initials “JB” painted on the chin of the mask as he led the Blues to their first ever Stanley Cup victory. Then once the Blues announced that they would be bringing back the 90’s throwback jerseys during the 2019-20 season, Binnington approached Gunnarsson with an idea of a mask tribute to the goalie he idolized growing up: Curtis Joseph. Gunnarsson has also made masks for Binnington for the 2020 NHL All-Star Game, EA Sports Team of the Year, and several others in which Binnington has used in play which are shown below: 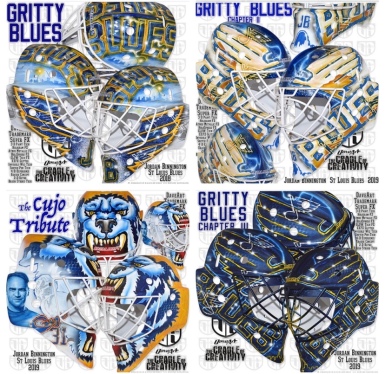 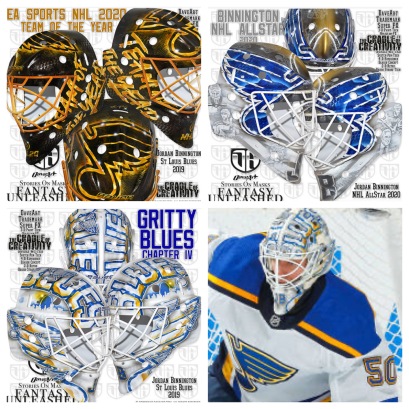 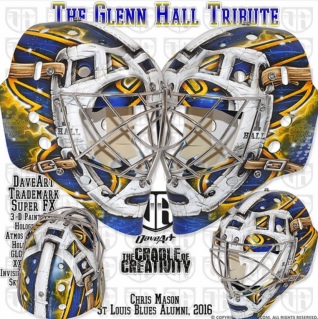 There is no doubt that David “DaveArt” Gunnarsson’s work speaks for itself. The vibrant colors and intricate details of each mask he creates tells a life story in its own way. When you look at all of the work Gunnarsson has done in goalie masks over the past two decades, there is no surprise that elite goaltenders keep coming back to him time and time again as Gunnarsson delivers every single time. His masks are physically and figuratively a work of art and the Blues netminding tandem has been wise to become clients of the best goalie mask artist the world has to offer.